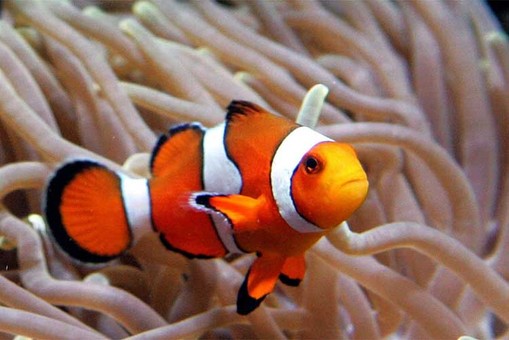 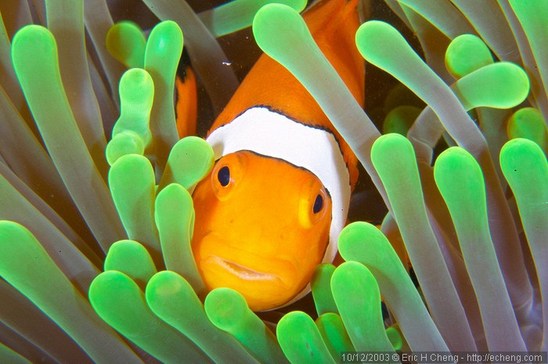 Clownfish do a wiggle dance to increase seawater circulation to their sea anemone hosts, helping the sea creatures breathe, a new study suggests.

The findings, published on Feb. 27 in the Journal of Experimental Biology, suggest the clownfish and sea anemone relationship may be more of a two-way street than previously thought. (Clownfish live in the wavy tentacles of sea anemones, stationary animals that typically live on the seafloor or coral reefs and are related to corals and jellyfish.)

"This is the first time we've ever discovered that the clownfish can actually help the sea anemones to breathe and can help them to aerate themselves," said study co-author Nanette Chadwick, a marine biologist at Auburn University.

It also suggests that anemones can live in so many habitats in part because of the clownfish. Anemones can thrive in stagnant water because clownfish dances, in which they flap their fins while dodging and turning while nestled deep in the anemone, circulate the water for the creatures, providing them with needed oxygen, Chadwick said. [Marine Marvels: Spectacular Photos of Sea Creatures]

One-way street?
It's long been known that the highly conspicuous, neon-colored clownfish would be lost without its anemone home. They can't swim very fast and are often gobbled up by predatory fish such as grouper or barracuda as soon as they venture outside of the refuge, Chadwick told LiveScience.

The sea anemones also produce a toxin that deters clownfish predators. The orange-and-white fish avoids the toxin by slathering itself in anemone mucus. The anemone sees the fish as part of itself and lets clownfish shelter between its tentacles.

Until now, most scientists thought the benefits went one way — from anemone to clownfish.

But Chadwick and her colleagues wondered whether, like coral fish and other fish species, the clownfish also benefit the sea anemones, by ventilating them.

To find out, the team gathered sea anemone and clownfish from the Red Sea near Aqaba, Jordan, and put them in a flow tank to see how much oxygen they used, both separately and together.

Together, the two species used up more oxygen than either could on their own. But the two had to be touching for this to happen, Chadwick said.

Wiggle dance
To understand why, the team spent hours filming the behavior of the clownfish within thesea anemone.

It turned out the clownfish performed a bizarre little wiggle dance, flapping its fins while dodging and turning.

"That appears to be kind of fluffing up the anemone," Chadwick said.

That creates fresh water circulation for the stationary anemone, allowing it to access more oxygenated water, speed up its metabolism, and grow faster. That's also good news for the clownfish, which have more room to hide within the anemone.

Conservation implications
The findings have implications for the tropical fish trade, Chadwick said. Typically, fishermen harvest all the clownfish in an anemone.

But when they do that, "they doom the anemone to die," she said.

Instead, fishermen should take just one or two clownfish while leaving the others to ventilate the anemone.

Of course, the most sustainable approach would be to buy aquarium fish that were grown in a lab or aquaculture — leaving all the anemones and the clownfish alone, she said.
I chose this article because it shows how new discoveries are being made all the time in the field of environmental science.

-Mutualism- When two organisms from different species interact and both benefit from the interaction.
- The Journal of Experimental Biology- This is a scientific journal that is peer-reviewed and is written on comparative animal physiology.
-Commensalism- Before this discovery, the relationship between clownfish and anemones was believed to be commensalism (where one organism benefits and the other is unaffected).

This article describes a new discovery in the relationship between the clownfish and the sea anemone. Originally, it was though that only the clownfish benefited from the relationship as they use the sea anemone for protection from predators. However, the new discover suggests that a type of clownfish dance, in which they flap their fins, aids in circulating water and assists with providing oxygen. Since the anemone is stationary, this circulation is very beneficial in providing oxygenated water along with helping the anemone grow faster. The article describes how now fishermen must realize that if they take all the clownfish from an anemone, they harm the anemone.

This article shows how new discoveries change our way of thinking and also call for adjustments to our interactions with the environment. This discovery suggests that people in the tropical fish trade should not take all the fish from the anemone because this harms the anemone while there are more sustainable approaches. New discoveries such as the discovery of the importance of this mutual relationship, must encourage humans to alter their actions in the environment.