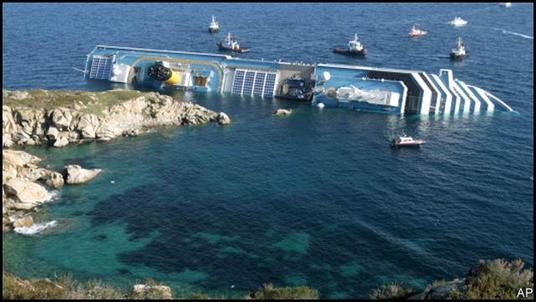 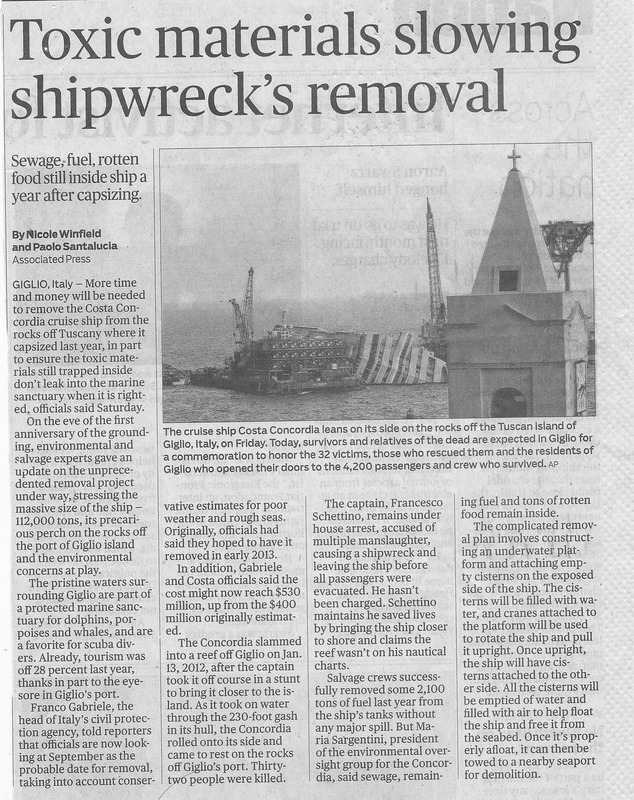 I selected this article for my scrapbook because it is an ongoing issue that has lasted for over a year and can have long lasting effects even after the ship is removed.

-Sewage treatment- Not only is the disaster dangerous because of the fuel onboard, but also because of the sewage trapped inside.
-Marine sanctuary- The ship may harm the ecosystems present in a nearby marine sanctuary.
- Coral reef- Coral reefs are very important as they act as a home for a variety of species and this disaster has harmed coral reefs and can do further harm.

The article covers the efforts to remove the ship that crashed into a coral reef in Italy on January 13th, 2012. There are complications in removing the wreckage because of the hazardous materials onboard the ship such as sewage, fuel, and rotten food. The situation is particularly problematic because the ship is near a marine sanctuary. The officials expect the ship to be removed this September while original estimates said the ship would be removed early on in 2013. The removal plan in very complex as platforms must be built underwater to bring the ship upright with the use of cranes. When the ship is afloat, it will be taken to a port for demolition.

This issue is a very important topic as it endangers the underwater ecosystems because of the possibility of fuel or sewage release. This article connects directly to the effects of water pollution. The article also demonstrates the high cost of not only removing the debris but also the high cost of taking precautionary measures to prevent an environmental disaster that could have been easily avoided.