Many Caribbean coral reefs have either stopped growing or are on the threshold of starting to erode with potential impacts to people, according to research from The University of Queensland (UQ).

Coral reefs build their structures by both producing and accumulating calcium carbonate, and this is essential for the maintenance and continued vertical growth capacity of reefs.

UQ and the international research team has found that the amount of new carbonate being added by Caribbean coral reefs is now significantly below rates measured over recent geological timescales, and in some habitats is as much as 70 percent lower.

Professor Peter Mumby from UQ's School of Biological Science said this discovery could affect millions of people who benefit from reef structures.

"Reef structures provide benefits such as being fishery habitats for seafood, they are used for recreational diving adventures, and often provide a natural barrier to storm surge," Professor Mumby said.

"Our new findings imply that the benefits people receive from reefs will deteriorate considerably unless we take greater care of them.”

Coral reefs form some of the planet's most biologically diverse ecosystems, and provide valuable services to humans and wildlife, however their ability to maintain their structures and continue to grow depends on the balance between the addition of new carbonate.

This is mostly produced by corals themselves, set against the loss of carbonate through various erosional processes.

Scientists have long known that reef ecosystems are in decline and that the amount of live coral on reefs is dwindling.

The research was published in Nature Communications and is the first evidence that these ecological changes are now also impacting on the growth potential of reefs themselves.

Professor Chris Perry of the University of Exeter led the international team of researchers on this project.

“Our estimates of current rates of reef growth in the Caribbean are extremely alarming. Our study goes beyond only examining how much coral there is, to also look at the delicate balance of biological factors which determine whether coral reefs will continue to grow or will erode," Professor Perry said.

"Our findings clearly show that recent ecological declines are now suppressing the growth potential of reefs in the region, and that this will have major implications for their ability to respond positively to future sea level rises.

“It is most concerning that many coral reefs across the Caribbean have seemingly lost their capacity to produce enough carbonate to continue growing vertically, whilst others are already at a threshold where they may start to erode.

"At the moment there is limited evidence of large-scale erosion or loss of actual reef structure, but clearly if these trends continue, reef erosion looks far more likely. Urgent action to improve management of reef habitats and to limit global temperature increases is likely to be critical to reduce further deterioration of reef habitat.” 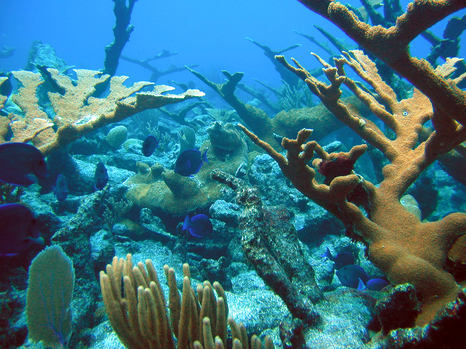 I chose this article because it is a growing problem that has a direct effect on humans as well as the environment.

The article reports that coral reefs are not growing or are starting to erode. Studies have shown that calcium carbonate, which forms reefs, is now 70 percent lower in some places. The article explains how humans will be affected by the decline in reefs as we rely on their seafood, recreational activities, and barriers from storms. If trends continue, coral reef erosion will become more likely as reefs continue to lose the ability to produce carbonate. The carbonate allows the reefs to grow vertically as opposed to eroding.

The topics in this article are very important as time progresses due to the many species that reefs are home to and also due to the many services reefs provide for humans. Reefs are some of the most biodiverse ecosystems on the planet and it is important to protect these ecosystems. The situation will continue to worsen in the future as sea levels rise and temperatures increase.