Plans for one of Britain’s biggest housing developments, of 5,000 homes worth hundreds of millions of pounds, may have to be abandoned because of the presence of nightingales, the birds which sing in the night and have long been a favourite of poets.

The case, which centres on a disused army site in Kent, presents the conflict between the need to build new houses and people’s wish to preserve Britain’s threatened countryside and wildlife in its sharpest possible form. It is likely to lead to a bitter struggle.

The site at Lodge Hill, Chattenden, on the Hoo peninsula north of Chatham, has been earmarked by Medway District Council for what is in effect a new town, which besides its enormous housing quota is intended to provide 5,000 new jobs. The main developers are to be Land Securities, Britain’s biggest commercial property company.

Yet last year scientists discovered that Lodge Hill is probably the best site in the country for the nightingale, which is rapidly disappearing from Britain – its numbers have dropped by more than 90 per cent in the last 40 years.

Today the case came to a head when Natural England, the Government’s wildlife watchdog, declared Lodge Hill to be a Site of Special Scientific Interest (SSSI) because of its nightingale population, which means that development will be much more difficult, and may ultimately be impossible.

The move provoked a furious response from Medway Council, which said it was “deeply unhappy” and was considering its options.

“This is very disappointing news to receive from unelected quangocrats at Natural England,” said the leader of the Conservative-controlled council, Rodney Chambers. “As a local authority we are eager for this scheme, which is on Government-owned land, to progress and deliver the houses and jobs we badly need.”

He added: “What hope does the country have of beating the economic downturn when infrastructure and housing projects like this are being stalled all over the country by the Government’s own agencies?” Land Securities also said it was disappointed with the decision.

However, the Royal Society for the Protection of Birds gave the decision its full backing. “Natural England is right to designate Lodge Hill as a SSSI in the face of extreme economic pressure,” said Martin Harper, the RSPB director of conservation. “We think it is time for Medway Council and Land Securities to go back to the drawing board and think about where they should build their houses.”

The case is likely to raise strong feelings because the nightingale is one of Britain’s most beloved birds, famed for the midnight song which males sing to attract females, from mid-April to June, after their migratory return from Africa.

So many poets have written about it, in many countries and civilisations from the classical world onwards, that it has been called “the most versified bird in the world”. In English literature, Samuel Taylor Coleridge, John Clare and most famously, John Keats, all wrote nightingale poems.

But in England – the nightingale is not found in the rest of Britain – the bird has been undergoing a remorseless decline. The latest estimate is that its population dropped by 52 per cent between 1995 and 2010, yet an examination of earlier records by the British Trust for Ornithology has suggested that over the last 40 years, the bird’s population has actually fallen by more than 90 per cent.

In a recent paper, scientists from the BTO said the nightingale would have been placed on the Red List of birds of conservation concern if this figure had been known about when the list was last revised.

The bird’s range is steadily contracting and the nightingale is now concentrated mainly in the south-east corner of England, especially in the counties of Suffolk, Essex, Kent, Surrey and Sussex.

It was known that Lodge Hill held nightingales, but its real importance was not discovered until last year, when the BTO carried out a national nightingale survey. It was found the core of the site held 69 singing males, and in total the figure was 84.

BTO scientists estimate that Lodge Hill contains about 1.3 per cent of the total national nightingale population, which the survey provisionally estimated to be between 6,250 and 6,550 pairs.

“If there is a better nightingale site in Britain, we don’t know of it,” said the BTO’s Dr Chris Hewson.

Mr Harper said: “Lodge Hill is probably one of the most important sites in the country for nightingales. We expect more than 80 singing males to return to this site in less than a month ready for the breeding season, and they need to have a secure home to come back to.” 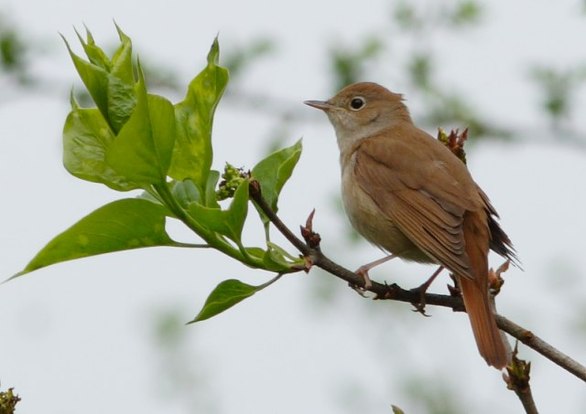 I chose this article because it discusses an environmental victory despite opposition because of economic interests.

-Nightingale- The nightingale is a bird species that has a declining populatoin in Britain.
-Site of Special Scientific Interest- SSSI is a conservation effort that marks a protected area in the UK.
-Natural England- Natural England is a part of the UK government that looks to protect England’s natural environment.

This article discusses a conflict in Britain as developers are looking to build on a site that is home to a species that is in decline. The nightingale has seen its population fall by 52 percent in the period from 1995 to 2010.  Development has already restricted the range of the bird and it mostly only seen in the southeast corner of England. The area under debate is known as Lodge Hill and is the perfect environment for the bird. On the other hand, developers want to build houses on the land and claim that the project would create 5,000 jobs. Natural England has protected the area, angering the developers and making construction very unlikely.

The topics in this article are important for the future of threatened and endangered species. Natural England showed that even with pressure from businesses and companies during an economic downturn, it is important to protect the environment. Hopefully this decision sets a precedent for cases to come regarding struggles between businesses and the environment.